This is Angie Breidenbach's second cookbook. I have not read the first, but she indicated in the introduction that she wrote Simple Elegance in response to readers' requests for an easy way to make wonderful meals for their families in a reasonable amount of time. That sounds like everyone's wish to me! Not only did Ms. Breidenbach deliver on that front, but she also includes what I find to be the most important feature of this book – suggestions and management for people with inflammatory conditions such as celiac disease or irritable bowel syndrome. There are many people with other autoimmune conditions, such as arthritis, who suffer periodic issues with their digestive systems, e.g., during a flare up, and they would do well to pick up a copy of this book, also.

What makes this book different is the "Angie factor". Ms. Breidenbach has the ability to distill complex information down into digestible chunks that are easily understood. This is not an easy feat. Psychologists look at this as the ability to both analyze and synthesize information. Some people are gifted in one area but it is rare to see both abilities be so strong. But I digress. Why is that important in this book? She includes information in the front and back of the book that is worth the cost of it ($20.95, per the cover) even if there were no recipes included!

Summarized in the front are five pages of tips on simple, elegant cooking. Prior to any holiday baking, it would be a great idea to whip this book out and review those. Every recipe is also coded for IBS, gluten intolerance/celiac, and weight loss. In the back of the book there are seven pages/twenty five tips for managing inflammatory bowel conditions, and a page of "difficult" foods to avoid, as well as a section citing helpful websites.

Summary: Strongly recommend for people with inflammatory conditions (of all types) that, either periodically or regularly, affect their digestive systems.

Disclosure: I received this cookbook as part of a wonderful gift package I won through a Facebook online Simple Elegance party I "attended" last month. Psst! I also have one in my Amazon cart, though!

My Story World characters, who live on the frontier of Virginia in the 18th century might have a pretty good Thanksgiving feast.

Sarah and Suzanne would likely serve up:


-Root vegetables, possibly roasted, seasoned with salt and rosemary
and
-Squash/pumpkin with molasses, ginger and cloves, baked like a casserole with some milk and eggs beat into it

-Suzanne, who is French, would make an apple pastry with a flaky crust

-Johan, German, would ask for sausages

Sarah, who has very poor vision and has mostly lived on the frontier, just wants her ten brothers to do all the carrying and cleaning up and could care less what will be served as long as she can sit down and enjoy it! Hmm, I guess I relate most to her!
Posted by Carrie Fancett Pagels at 11/23/2010 08:00:00 PM 3 comments: 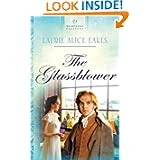 Laurie Alice Eakes' book, The Glassblower, was an ACFW Carol finalist this year. This is a delightful book and despite its small size, the characters are wonderfully and fully developed. Collin Grassick, a master glassblower from Scotland, is sure to steal your heart away before you are done reading! Laurie and I discussed my observation that she showed the gift of beautiful parsimony in this book. We aren't sure if that is the correct terminology, in fact I am pretty sure it isn't. Let me try it this way - Laurie Alice has the ability to distill down to the best elements and deliver a wonderful elixir that the reader can savor.
Heartsongs Presents – Historical, through Barbour, published in 2009. This is a historical romance distributed through mass market but available for purchase at http://www.christianbook.com/. It is 176 pages but I have to say that Laurie Alice is excellent at including wonderful historical tidbits that you will want to take your time reading it to enjoy all the details. Don't be deceived into thinking this is a little late night read. Right now, you can purchase this book for under $2.50 at CBD and it was up against a number of other books for the Carol competition that were twice as long and probably five times the cost. Do yourself a favor and order it today for Author's Day!
Posted by Carrie Fancett Pagels at 11/01/2010 07:50:00 PM 9 comments: