Isn't it great when God gives us special helpers to fulfill a mission he has assigned to us to complete? Sometimes, it is clear who these people are. Perhaps there is something He has told you to do and it requires abilities that you do not possess or other characteristics you lack that are mandatory for the job. Then it is so awesome when He puts those people in our paths and they become willing and involved in the task. Our earthly angels sure keep us going when the Evil One seeks to destroy God's plan. I have always loved reading in the bible about Barnabus, who was one of those great encouragers and helpers. God knows when we require someone alongside of us in order to do His will.

Is there a special family member or friend who has helped in God's work today? If so, give them thanks today even if no one has acknowledged your work.

Or are you the one called to serve alongside? Have you ever been put on a special assignment with someone who you knew was doing the work God had called them to do? Isn't it both an awesome AND a humbling experience? There is a special affirmation God gives you when you partner with someone who is on an extra special mission from the Lord. Be SURE you understand that the Hater will come after you, too, when he sees how God is using you. Put on the full armor of God – you will need it!

Colonial Dress on the Frontier 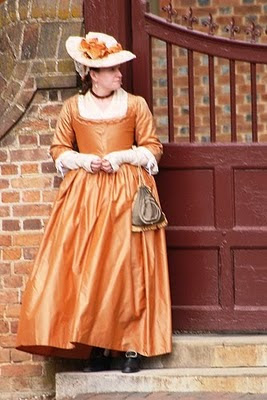 My protagonist buys a dress like this for his wife when he comes to Williamsburg. Most women on the frontier did not dress in such fancy attire. Simple dresses suitable for the many demands of frontier living were more appropriate. Homespun fabric, rather than expensive imported English cloth, was used with plant-based dyes to impart color. My hero decides his lovely wife must have a beautiful dress like this and follows several women around until he ascertains where they have purchased their finery. This is a lovely gown, don't you agree?

Laura's book, The Frontiersman's Daughter, is my favorite historical book in a very long time. It is available through Amazon (see my review posted there) and through Christianbook Distributors (www.christianbooks.com). The CBD reviewers must have loved her book as much as I did because they put a coffee cup next to her book listing in the current mailing that I received!

Rhapsody in Red by Donn Taylor

This is a "Preston Barclay Mystery" published by Moody in 2009.

Donn Taylor nails the politics of small universities, particularly those that are in transition. Having worked in faculty positions in a medical school and a small and a medium sized regional college and university I found myself laughing out loud at the antics of his characters. I enjoy a good mystery about three times a year or so and normally I turn to the Higgins Clarks, mother and daughter. However, some of the stories in these secular books have been so creepy that I have been watching for a Christian mystery writer for these forays out of the historical fiction realm.

Dr. Preston Barclay finds himself in the middle of a murder investigation, along with a younger Wiccan faculty member. Characterization is definitely unique, with Professor Barclay having musical hallucinations. His cast of characters all have a distinct voice and are all well-developed without being distracting. Taylor does an excellent job of fitting the music to the characters and scenes. The plot took a lot of great twists and turns and Taylor definitely knows how to pull the reader along with him. I was planning to go to sleep at ten last night but HAD to finish the book. A little after one, I closed the book, satisfied with an ending that nicely tied off all the plot strings. This would be a great book for: Christian mystery readers, faculty members of universities (who will shout "someone really understands!!"), and those looking for a well-written Christian book with a delightful male character as well as a strong female protagonist.

People who hoard usually have a combination of an anxiety disorder combined with some traumatic life event that has triggered this need. This typically involves a significant financial setback of some type. Persons with extreme hoarding and/or bizarre hoarding (think of some disgusting things that no one would "collect" and you get my drift) often have thought disorders as well. The deterioration in mental health makes the hoarding more prevalent and also odder.

Obsessive Compulsive Disorder (OCD) can range from the milder forms to more extreme and debilitating, such as the hoarder of weird artifacts. Someone who has an obsessive compulsive personality vs. disorder is not, themselves, affected by their disorder. Nope – rather they bug the heck out of you! Someone who has OCD is impacted by the disorder themselves and is distressed by their OCD behaviors. Someone with OC personality may only be annoyed that you are asking them to change their behavior, which to THEM is not a problem. Hoarders tend to fall in the personality disordered group. Most are not troubled by their "collecting" problem.

Compulsive hoarders have difficulty discarding items and what might be trash to someone else may be something that they think they might "need" later. As with other forms of OC, there is a component of perfectionism in many with this disorder.

Animal hoarders are their own breed (pun intended!). They seem to draw strength from the animals. Frequently interpersonal skills are poor and the animal hoarder feels more comfortable with their menagerie than with people.

It is my professional opinion that brain mapping would be very useful in further delineating brain functions affected by hoarding and its subtypes. Since decision making is one area that is a problem, it would seem that executive functions would be diminished. Thus, ADHDers should have a higher incidence of this disorder. Also, since executive functions are impacted first in many neurodegenerative disorders, including conditions such as Parkinson's, one may see some of this behavior displayed in the early stages of brain impact and this behavior would be atypical (rather than an increase in this type of behavior) for the individual.

Questions for the Psychologist

Q: How might the health department get called in when there are strong odors coming from someone's house?

A: Children: My experience has been that the first question would be whether there are children in the house. If there are then social services can be called. They would then notify the public health department. Typically, a plan would be developed and a timeline set for the owner to clear the house. If the health hazards constitute a significant threat for the children, they will be removed to foster care. I have only seen this happen once in over twenty years of practice. If they remain in the home and a plan is developed, and if it is not followed, the social worker may then need to get a judge to issue an order and a consequence. Social workers may come once a week to assess progress. I have had a client who would schedule appointments on a day she knew the social worker was coming and then would tell her that she was at the therapist's office with the children. It might be another week before the social worker got back out again. In some cases, a team of helpers may come in to assist the parent in getting the home safe and clean again, but this would be rare, in my experience. Noncompliance with a judge's time lines would result in removal of the children.

Adults: If the state has elder laws and it is an elderly person, again social services may intervene. However, let's say it isn't and there is a stench coming from a home. Normally, there would need to be someone with mandated reporter status for this to be taken seriously. That would include, but not be limited to: social workers, psychologists, ministers, or health care providers. Social services would not be involved in this scenario but public health and law enforcement.