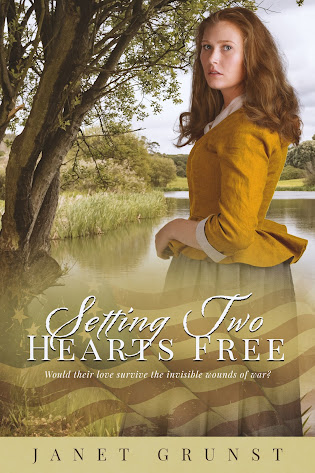 
Tagline: Would their love survive the invisible wounds of war?

Donald Duncan joined the Patriot cause for noble reasons, battling the British while enduring deprivation and hardship on every side. The war has changed him, and now the battle is internal. Returning home to Virginia is in sight where a new life and his Mary wait for him.

Mary Stewart spends the war years with her family at Stewarts’ Green, helping them operate their ordinary. Daily, she prays for Donald’s safe return, eagerly waiting for him … until that day the evil side of war touches her.

Two hearts changed by a war that dragged on for six years. Two hearts left hurting and struggling to find the love and trust they once knew. Is there a path for them to rekindle what was lost, Setting Two Hearts Free?

CFP: This new novel by award-winning author Janet Grunst has all solid five star reviews! I'm privileged to know Janet as a friend and local co-leader with me of our local Christian fiction authors' group. Janet is also a long-time blogger on the Colonial Quills blog with me. Setting Two Hearts Free has wonderful endorsements from some of Christian Fictions top authors such as Laura Frantz and Kate Breslin! I am adding this to my TBR pile on goodreads and I recommend you grab it, too! 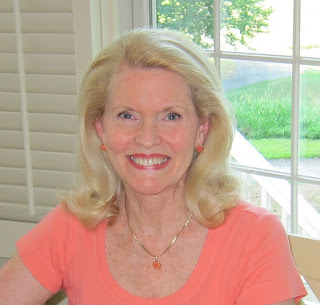 Janet Grunst is a wife, mother of two sons, and grandmother of eight. She lives in the historic triangle of Virginia (Williamsburg, Jamestown, Yorktown) with her husband. Brought up in a Navy family, she’s lived throughout the United States as well as Spain. A lifelong student of history, her love of writing fiction grew out of a desire to share stories that communicate the truths of the Christian faith, as well as entertain, inspire, and encourage readers.

Connect with Janet on:

Giveaway: Leave a comment of encouragement for this talented author and lovely lady for a chance to win choice of paperback (international only if available through Book Depository to your country) or ebook. Get an extra entry if you add this book on goodreads (just put GR in with your comment!).
Posted by Carrie Fancett Pagels at 10/28/2020 03:47:00 AM